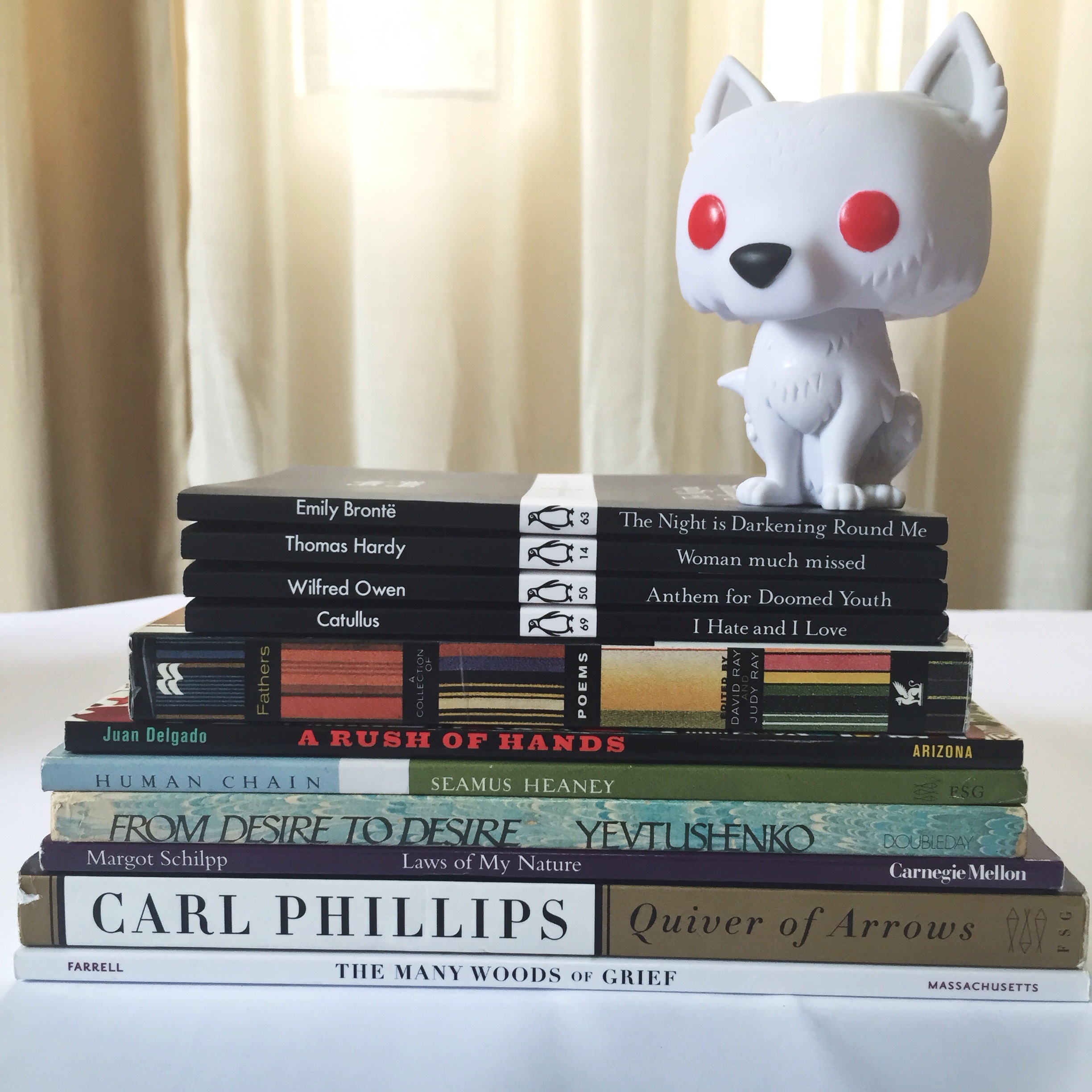 Just in case you haven’t heard I am into poetry so much. So whenever I made  a trip to a second hand bookstore I always look for poetry books in cheap prices. I tell you there is some sense of thrill to it! And so I decided to this poetry book haulin’ a monthly thing.

So for June here are the poetry books I got. Total of  11 books added to my collection.

A Rush of Hands by Juan Delgado 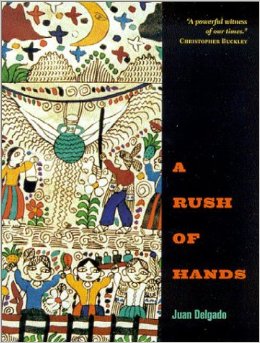 The whispers of buried lives. The silence of a growing resistance. The stigma of poverty. In haunting images. Juan Delgado explores the boundaries we cross daily.

These poems deal honestly with the realities of urban life, whether dramatizing the effects of drive-by shootings, unfolding a labor protest that “spreads across the city like a prayer,” or summoning a ghostlike immigrant damned to retrace his journey across the border. daily and historical struggles are elevated to the level of myth. Yet, amid these poems there are images of life, and love: a girl leaving hickeys rich as chocolate, a boy pledging to rescure his mother from poverty, a man studying the desert ground for tracks signaling immigrants in distress.

Delgado is unflinching in showing us the harshness surrounding the lives he cherishes, and with resonant details and lyrical language he urges us to examine those lives – and ultimately our own. A Rush of Hands is a spellbinding book that will captivate both the ear and the heart.

The Many Woods of Grief by Lucas Farrell 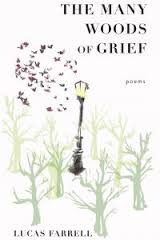 Winner of the Juniper Prize for Poetry

In this striking debut volume. Lucas Farrell offers a lyrical and illuminating field guide to the flora and fauna of “worlds just out of reach”. With the precision and detail of an Audubon sketch, he turns his naturalist’s eye to the vast landscape of human emotion all the while affirming “how real this world we live in / must be to live in.”\

Laws of my Nature by Margot Schlipp 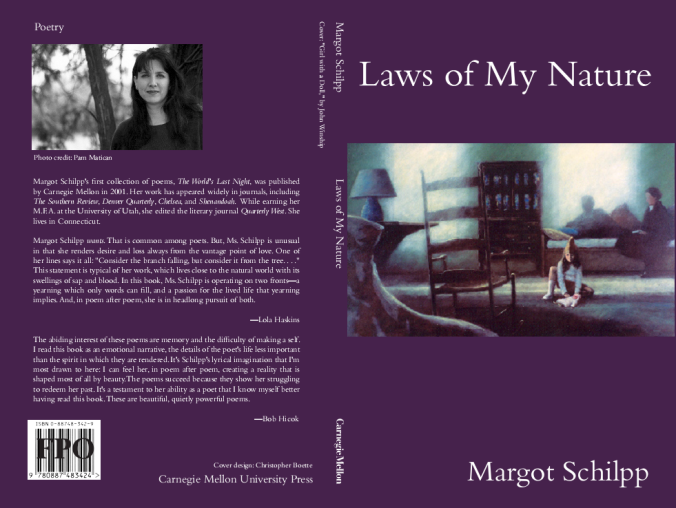 The abiding interest of these poems are memory and the difficulty of making a self. I read this book as an emotional narrative, the detail of the poet’s life less important than the spirit in which they are rendered. It’s Schilpp’s lyrical imagination that I’m most drawn to here: I can feel her, in poem after poem, creating a reality that is shaped most of all by beauty. The poems succeed because they show her struggling to redeem her past. It’s a testament to her ability as a poet that I know myself better having read this book. These are beautiful, quietly powerful poems.  – Bob Hicok 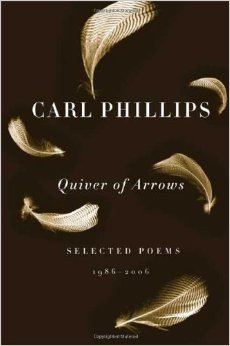 Quiver of Arrows is a generous gathering from Carl Phillips’s work, showcasing the twenty-year revolution of one of America’s most distinctive-and one of poetry’s most essential – contemporary voices. Hailed from the beginning of his career for a poetry provocative in its candor, uncompromising in its inquiry, and at once rigorous and innovative in its attention to craft. Phillips has in the course of eight critically acclaimed collections, generated a sustained meditation on the restless and ever-shifting myth of identity. Desire and loss, mastery and subjugation, belief and doubt, sex, animal instinct, reason: these are among the lenses through which Phillips examines what is means to be the most bewildering, irresolvable conundrum – a human being in the world. Quiver of Arrows is the record of a powerful vision that has established itself as a necessary step toward our understanding of who we are in the twenty first century.

From Desire to Desire by Yevgeny Yevtushenko 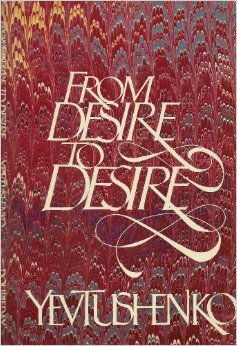 Published 1976. A collection of love poetry 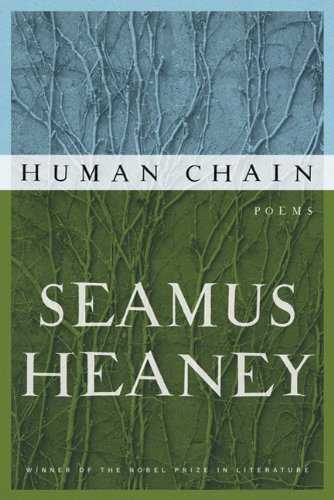 Seamus Heaney’s new collection elicits continuities and solidarities, between husband and wife, child and parent, then and now, inside an intently remembered present–the stepping stones of the day, the weight and heft of what is passed from hand to hand, lifted and lowered. Human Chain also broaches larger questions of transmission, of lifelines to the inherited past. There are newly minted versions of anonymous early Irish lyrics, poems that stand at the crossroads of oral and written, and other “hermit songs” that weigh equally in their balance the craft of scribe and the poet’s early calling as scholar. A remarkable sequence entitled “Route 101” plots the descent into the underworld in the Aeneid against single moments in the arc of a life, from a 1950s childhood to the birth of a first grandchild. Other poems display a Virgilian pietas for the dead–friends, neighbors, family–that is yet wholly and movingly vernacular.

Human Chain also includes a poetic “herbal” adapted from the Breton poet Guillevic–lyrics as delicate as ferns, which puzzle briefly over the world of things and landscapes that exclude human speech, while affirming the interconnectedness of phenomena, as of a self-sufficiency in which we too are included

Fathers: A collection of Poems Edited by David Ray and Judy Ray

One hundred and eighteen of our finest American poets pay eloquent homage to their fathers and the broader concept of fatherhood in this loving anthology.

In this splendid collection both daughters and sons introduce us and pay heartfelt tribute to their fathers. Whether writing of fathers who were heroes or anti-heros, defenders or pacifists, those who went away suddenly or those who reappeared after a long period of time, the poets here cast the net wide to harvest the infinite variety of the father-and-child relationship. This moving anthology includes:

Woman Much Missed By Thomas Hardy 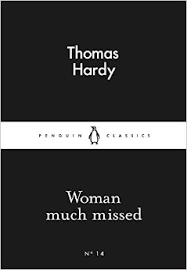 Moving, elegiac verse set in rural landscape penned by the grief-stricken Hardy after his wife’s death.

I Hate and I Love by Catullus

The Night is Darkening Around Me by Emily Bronte 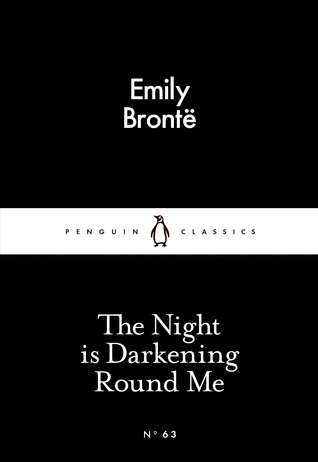 Bronte’s most passionate, powerful peoms as death, nature’s beauty and the passage of time. 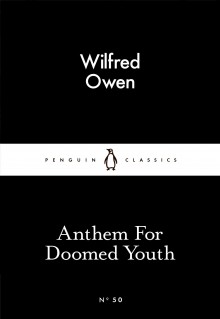 The great First World War poet first hand the horror, devastation and futility of the trenches.

So that’s is my June Poetry BookHaul. I’ll be posting a wrap up of all the poetry books I’ve read! So watch out for that! Thanks to my new followers here! You guys are awesome! 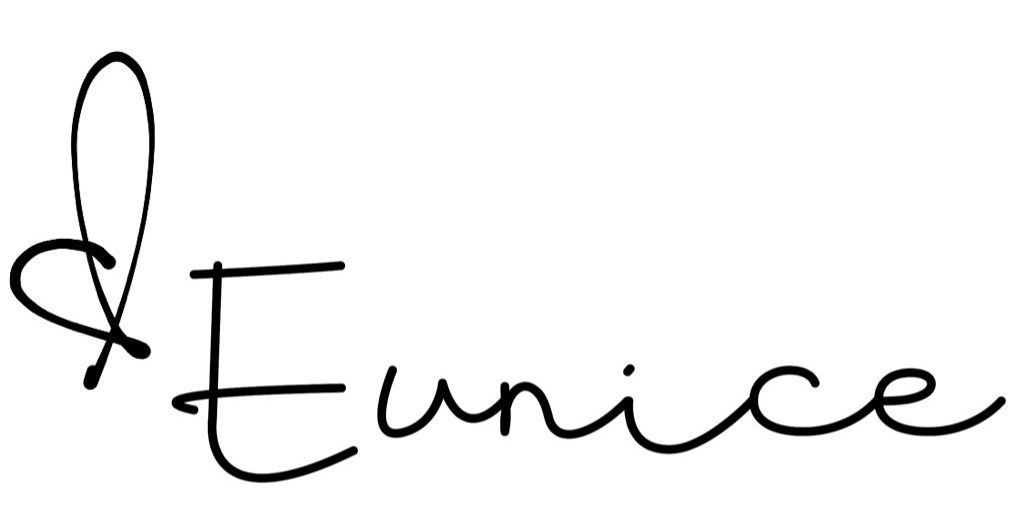