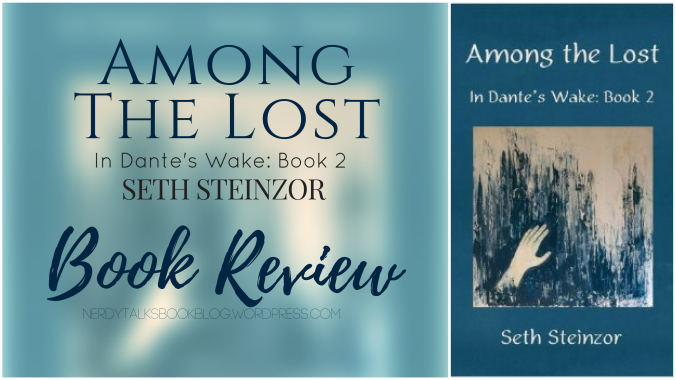 Synopsis from Goodreads: Among the Lost, set in the modern American rust belt, is a meditation drawn from Dante’s Purgatorio. To Dante, Purgatory was the mountain where souls not damned went after death to cleanse themselves of sin in preparation for entering Paradise. What, Steinzor asks, are we preparing ourselves for, having lost the fear of hell and the hope of heaven, in the course of our daily urban existence? And whatever that is, how do we go about preparing for it?

As part of Poetic Book Tours I was asked by Serena if I would be willing to join in reading and reviewing Among The Lost, I have always been a fan of Dante’s Circles of Hell, and after learning that Among The Lost is inspired by Dante’s Purgatorio, I knew then I have to be a part of this Book Tour or I will probably regret it. Seth Steinzor’s poetry is rich and on point. Often times there’s no beating around the bush, he writes what needs to be said, with such gusto and precision that you can help but pause and ponder on the truth it was revealing. And the truth was, our existence had been tainted with mostly horrible and unimaginable things. The book was divided into different Canto, where our narrator encounters different scenario and different people with varied dilemma or varied traits. It was heavily political and realistic at the same time, which at times hard to get into but once you get the hang of it, it will be something you truly appreciate. Among the Lost used modern setting to juxtapose those of ancient times, which was truly remarkable. Seth Steinzor “modernized” a classic many of us loved. He concoct his poetry into something relevant and timely, something one could identify with.

I have not read the first book, so I had no way of comparing them. This poetry book may not be for everyone, at times I get confused on certain references, thus making it hard for me to completely grasp what was being conveyed. In the same vein I could not fully recommend this one to those people who are just beginning to appreciate poetry as this one may not be as engaging, but then it is something worth a try, especially to the ones who wanted to read more in depth portrayal of government and the society. But one thing I have to say – Seth Steinzor’s writing style is truly magnificent. He had a way with words that made the book more appealing and it was a bonus that this book was told in story form following the journey of the narrator from one specific stage or path onto another.

I specifically liked this excerpt from his poem Canto VI: In the Clouds

Telling you of this brings it back to me as

if I were standing there! – and after

not too many heartbeats thinking this:

The sight of these two mammals enjoying so

fully the little they have in common should shame you to

weeping, America! How hard can it

be to care for one another? Your rich

begrudge your poor their mite. Your poor

begrudge each other. The ones in the middle fear

the ones below them, bend the knee to the

moneyed, and keep an eye on their neigbors. The space a

dollar takes is more than you would

spare the creatures around you. You’re free with this:

you shit your nest and everywhere else. You

stomp around the world with an anxious smile and a

big knife, taking whatever you

want, and whoever gets in your way had better

look to god for help. You wonder

why they hate you, who cried your name with longing…

Seth Steinzor protested the Vietnam War during his high school years near Buffalo, New York, and his years at Middlebury College, advocated Native American causes after law school, and has made a career as a civil rights attorney, criminal prosecutor, and welfare attorney for the State of Vermont. Throughout he has written poetry. In early 1980s Boston he edited a small literary journal. His first, highly praised book, To Join the Lost, was published in 2010.